What’s It Like To Drive The Queen Mother’s Jaguar V12 Sovereign?

We’re celebrating Jaguar's flagship XJ saloon, showcasing some of the most important models – starting with the Queen Mother’s 1973 V12.

For over half a century, the Jaguar XJ has remained a byword for refinement. Providing slick aesthetics with svelte yet aggressive styling, paired with enough engine power to shame any automotive rival, each generation of the marque’s flagship model has set the benchmark by which all other luxury brands are judged.

The chosen steed of nobility, criminals and aspiring motorists alike, the XJ has narrated some of modern history’s most intricate moments. It was often associated with those who yield serious political power, and none come with more gravitas than the Queen Mother’s personal Jaguar V12. If this big cat powered towards you come gin o’clock, you’d be diving for the nearest hedgerow…

Employed to dart around the Balmoral estate, this XJ captured Her Majesty’s affections so strongly that she kept it right up until her death in 2002. Apparently, Elizabeth was offered a new model on several occasions, yet chose to keep the timeless 12-cylinder close by, almost like a mechanical lady-in-waiting.

Her Majesty’s XJ – a 1973 long-wheelbase variant – replaced the Crown’s aging 1955 Mark VII, which was returned to Jaguar’s Coventry factory for safe keeping. Kicking out 269bhp, the XJ was claimed to be the fastest four-seater in the world. Top speed was well beyond 140mph, if you could stomach the fuel consumption from the venerable yet smooth V12, with a 0-60mph sprint completed in little over eight seconds. 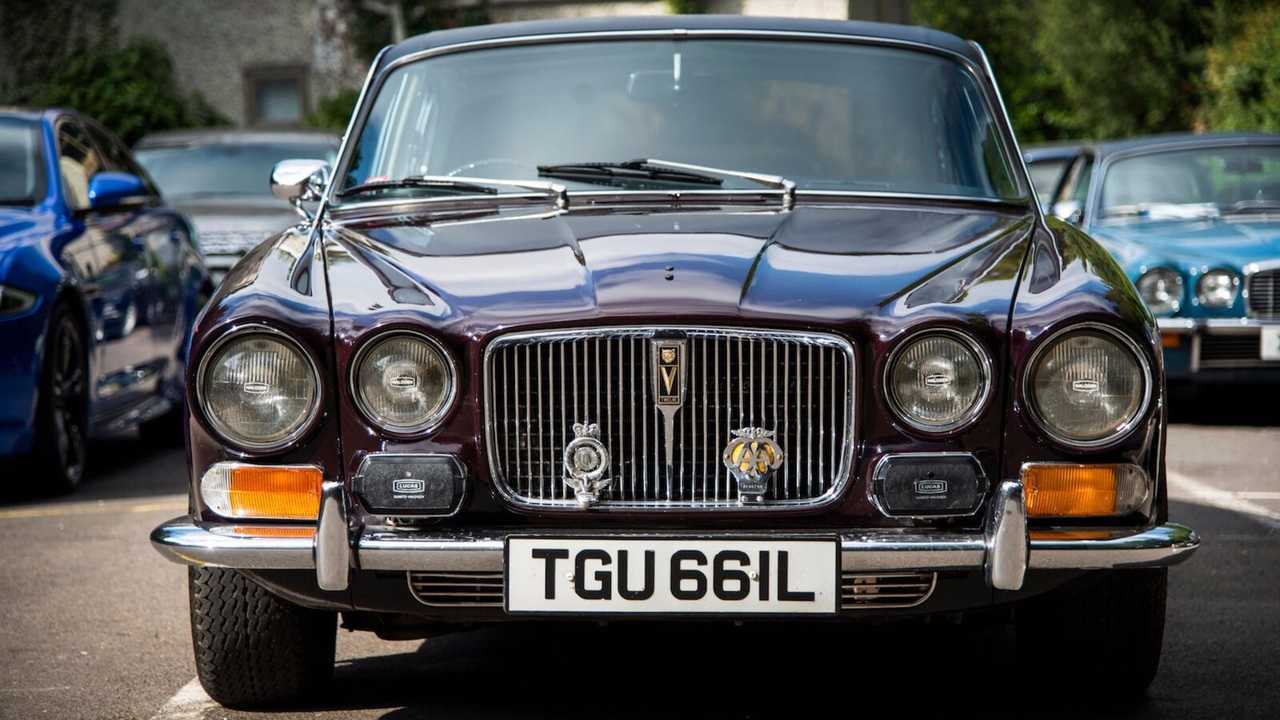 The XJ saloon was specially painted in the Royal shade of claret and fitted with a bespoke interior that defied official Jaguar protocol. Unlike any previous Browns Lane creation, the V12 was complemented with the Vanden Plas interior as found on the equivalent Daimler. The mere mention of such an act would often make Sir William Lyon’s teeth itch. Don’t fret for Lyons, though; he charged a small fortune for the Royal privilege. 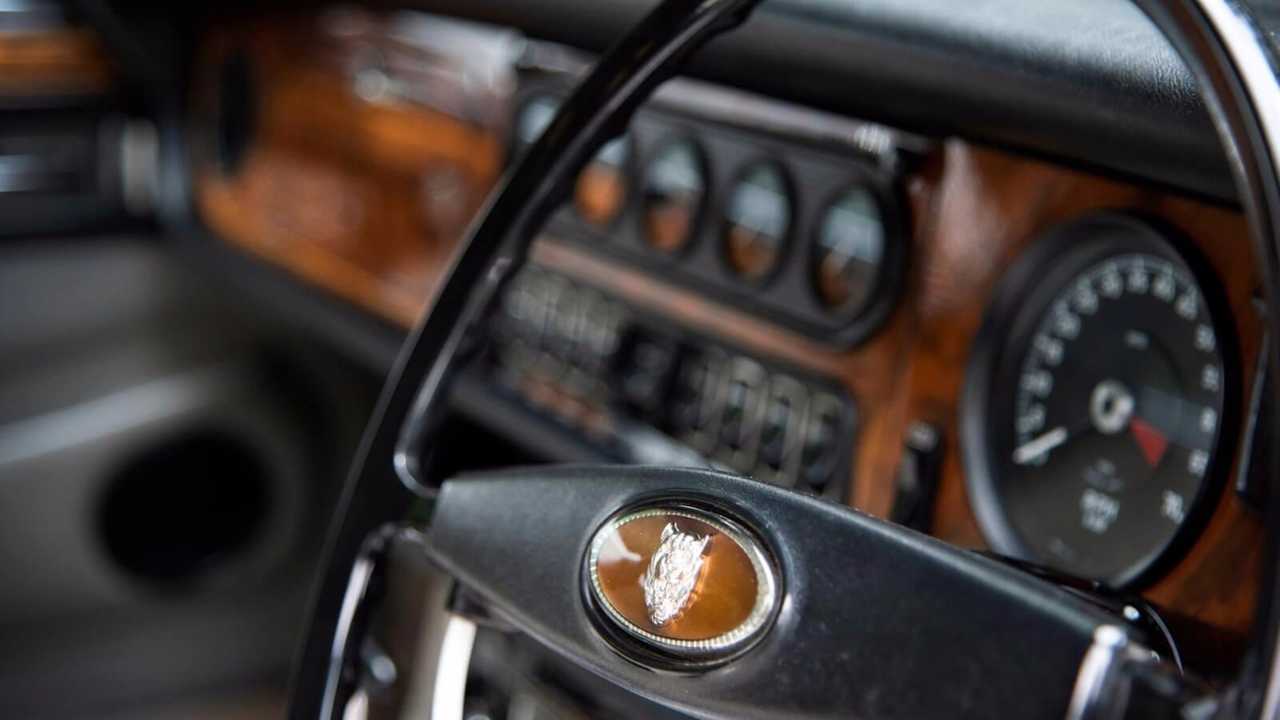 Soon after the Queen Mother and the XJ made their acquaintance, she expressed the wish that, upon her eventual death, the car should be returned to Jaguar’s Heritage Trust. That duly happened in April 2002.

Thanks to this clause, Motorious received an opportunity to drive the Royal vehicle, which is currently residing under the care of Jaguar’s Heritage specialists. It only felt right to use my XJ40 saloon to travel to such a prestigious appointment. Mainly because it started that morning, and the P38 was still broken.

Pulling into the car park of the Bell and the Dragon Hotel in Churt, Surrey, the Royal XJ’s presence radiated across the tarmac like a bomb blast. Very rarely have I been stopped in my tracks purely by catching sight of a car, but this was something else. It glared at me with the demonic charm of a villainous dignitary. 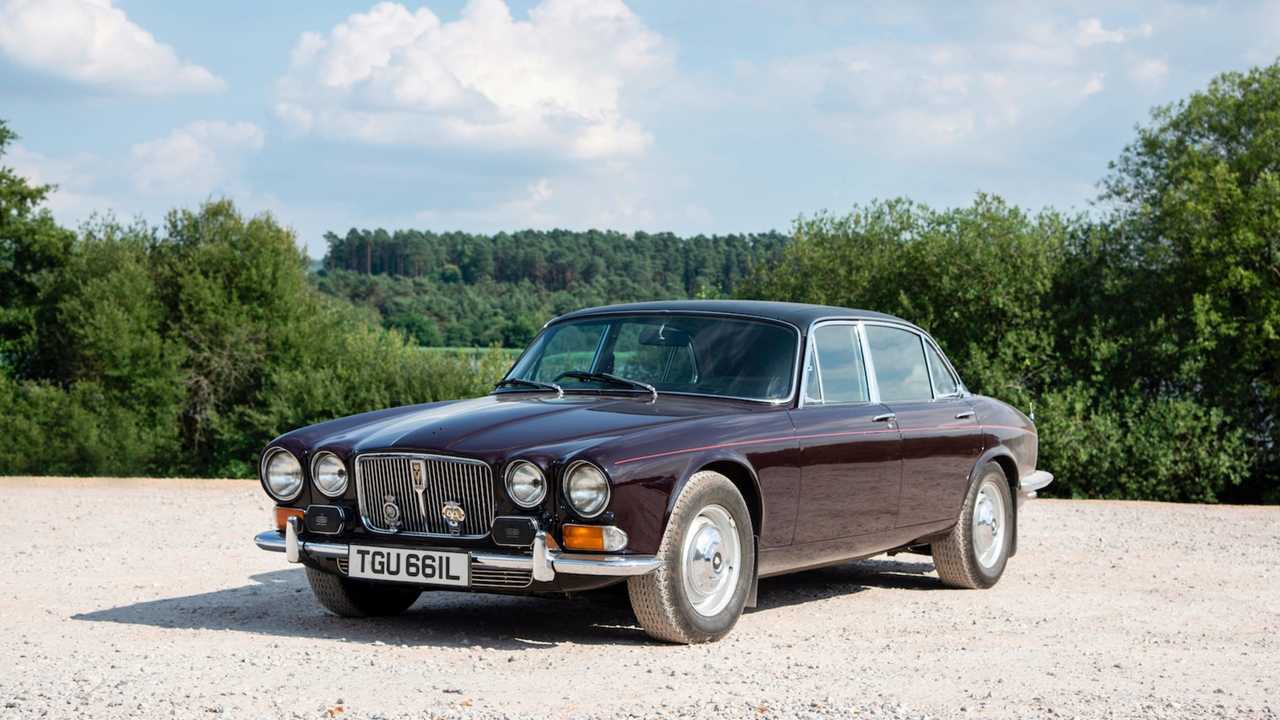 As I parked up next to its claret haunches, my own dilapidated XJ and accompanying ‘patina’ appeared somewhat insulting – like introducing the Queen Mother to King Ralph. I approached the Jaguar with caution. Frankly, in this profession, you jump in and out of all manner of special vehicles, however, none had yet commanded the respect this car did.

Taking the keys in my shaking palm, I climbed into the driver’s seat and gently clicked the door into place. An overwhelming sense of equanimity dominated the cabin, with lashings of leather and great slabs of wood offering the hospitable air of well-heeled serving staff. 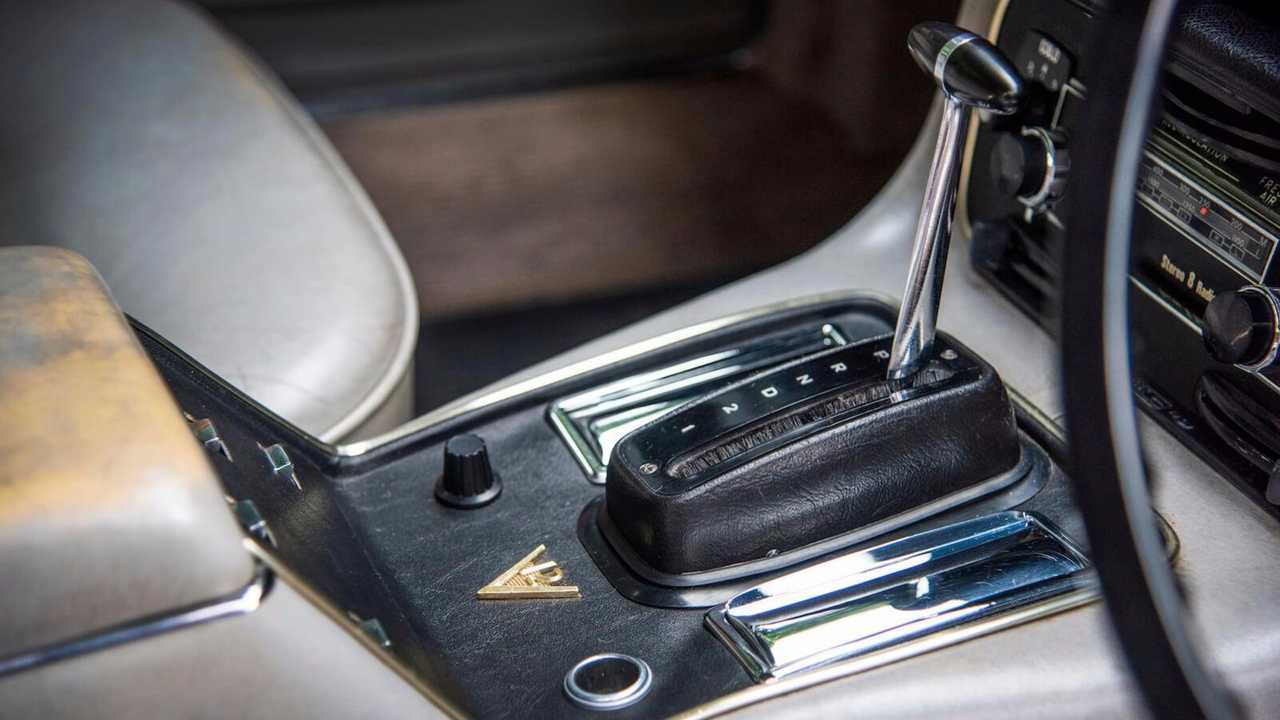 I turned the key to awaken all 12 cylinders from their early-morning slumber. As their movement gently wafted the car’s hull from side to side, the exhaust omitted a dignified garble that became a deep, throaty battle cry upon blipping the throttle.

I engaged the transmission and gingerly set off to explore Surrey’s leafy back roads, unable to shake off the notion that putting miles on such a vehicle felt somewhat wrong. Surely it should be preserved in a museum, waxed and polished daily for all to worship? 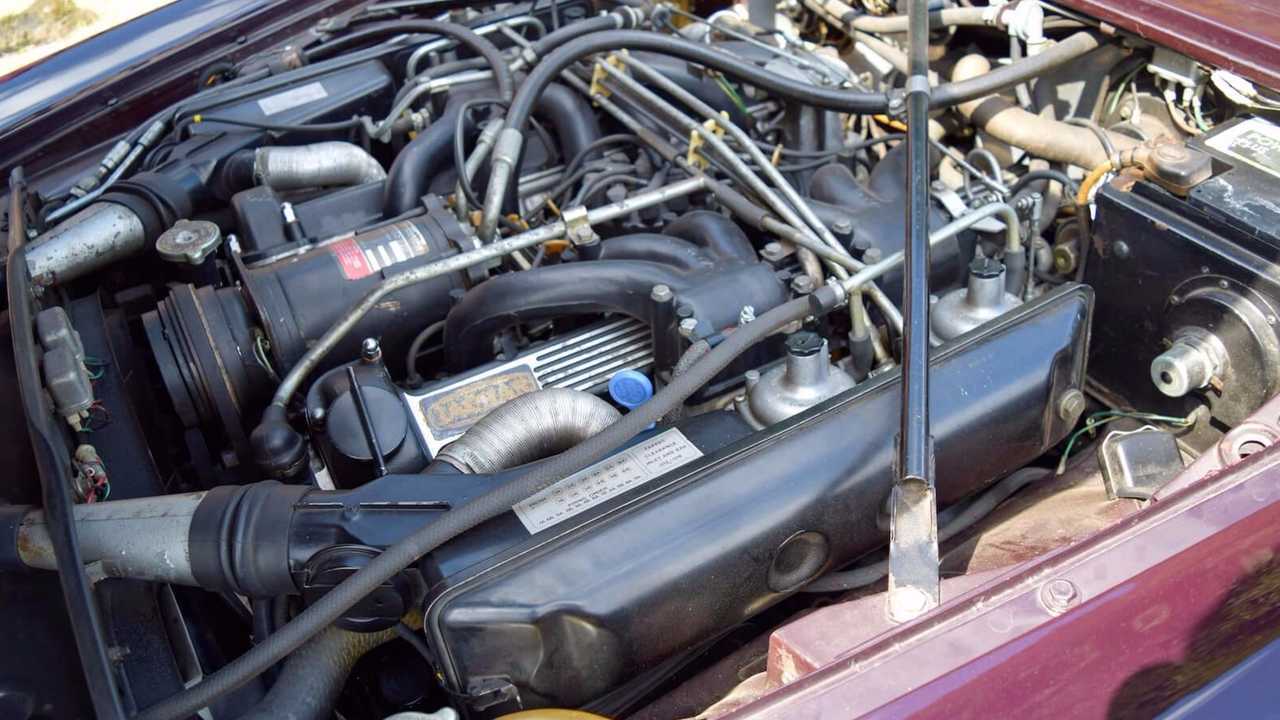 The drivetrain didn’t appear to agree. It yearned for high revs, pushing gradually along the highway with soft-spoken grace. The rev counter wasn’t even breaching 3000rpm, yet the torque curve was very much present; lurking underfoot with undying tenacity. The Jaguar was out of captivity and encouraging all manner of bad behaviour.

‘Priceless’ is a word that causes my heart to miss a beat, and with that in mind, I approached corners at a sensible pace. Traveling at such a speed brought with it other advantages alongside keeping the car in one piece – enjoying one’s ride comfort. 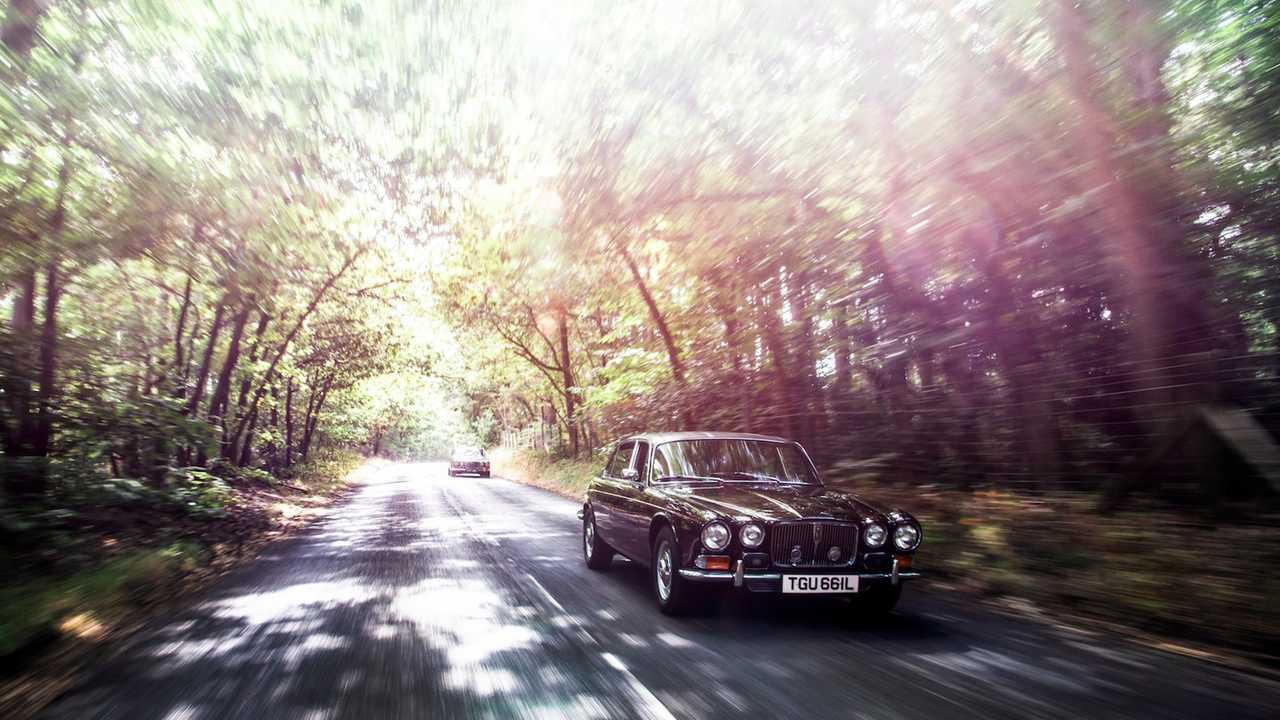 Classics Jags unfailingly offer the cosy refuge usually found in your mother’s home cooking, but this upped the ante. The footwells were lined in thick carpets that absorbed road noise like a sponge, no matter how swift the progress. Even when cruising at the national speed limit, the only mild commotion remained a muted thunder from beyond the bulkhead, mated with a stately growl when making haste.

Catching the reflection of the Jaguar’s authoritative – aggressive, even – stance in glass-fronted buildings sent a shiver down my spine. It was a menacing figure veiled under a familiar frame; the slight aesthetic differences – a raked grille and steel-capped wheel hubs – crafting a potent blend of menace and grandeur.

Feeding the thin steering wheel between my hands, it was hard not to imagine what thoughts must have been going through the Queen Mum’s head while driving the car during its years in Royal service. 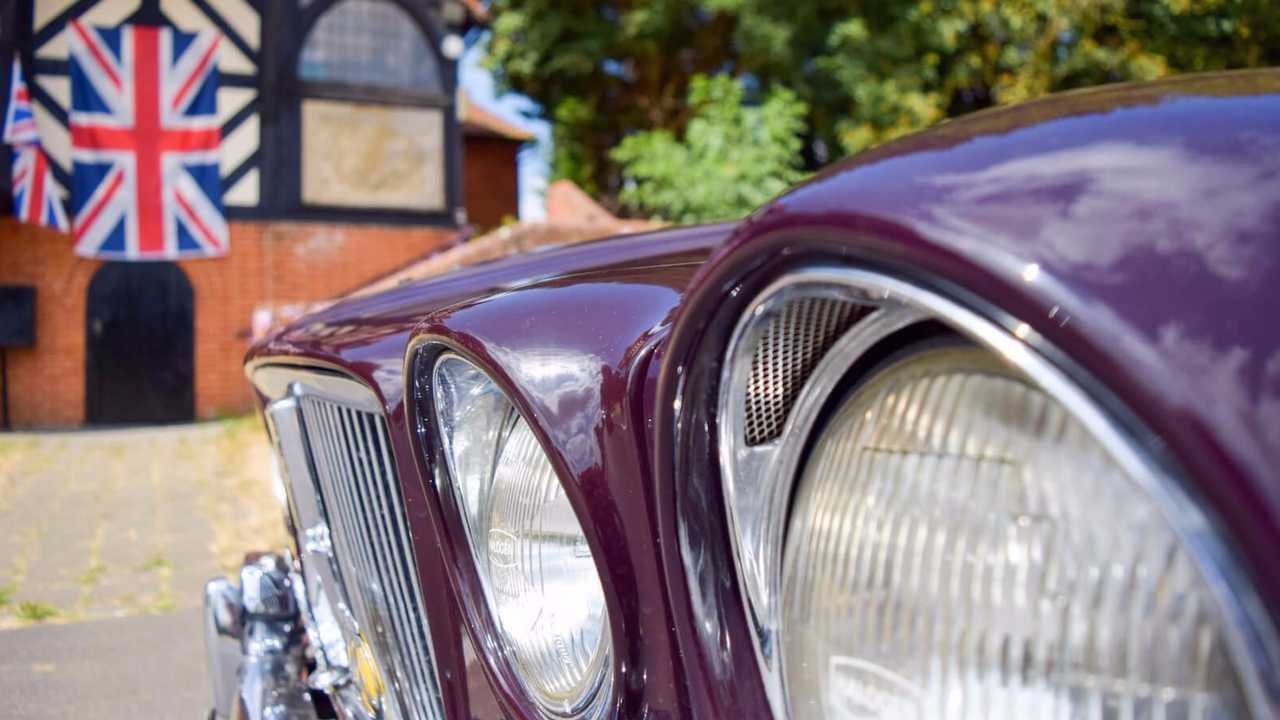 This Jag would have been nearby upon the death of Princess Margaret, the announcement of Princess Diana’s fatal car accident and the Queen’s ‘annus horribilis’; the year Windsor Castle went up in flames, the Princess Royal and Captain Phillips divorced, and both the Prince and Princess of Wales and the Duke and Duchess of York separated.

At times like that, the Jaguar’s ambiance would have been most welcome; you could honestly drive through a riot or an earthquake and remain quite unperturbed. But, that’s enough of that. You’ll want to know how it behaves at speed. Whisper this quietly; it behaves rather well. Even when tucking into a bend, the rear wheels stay planted and momentum is far from lost. 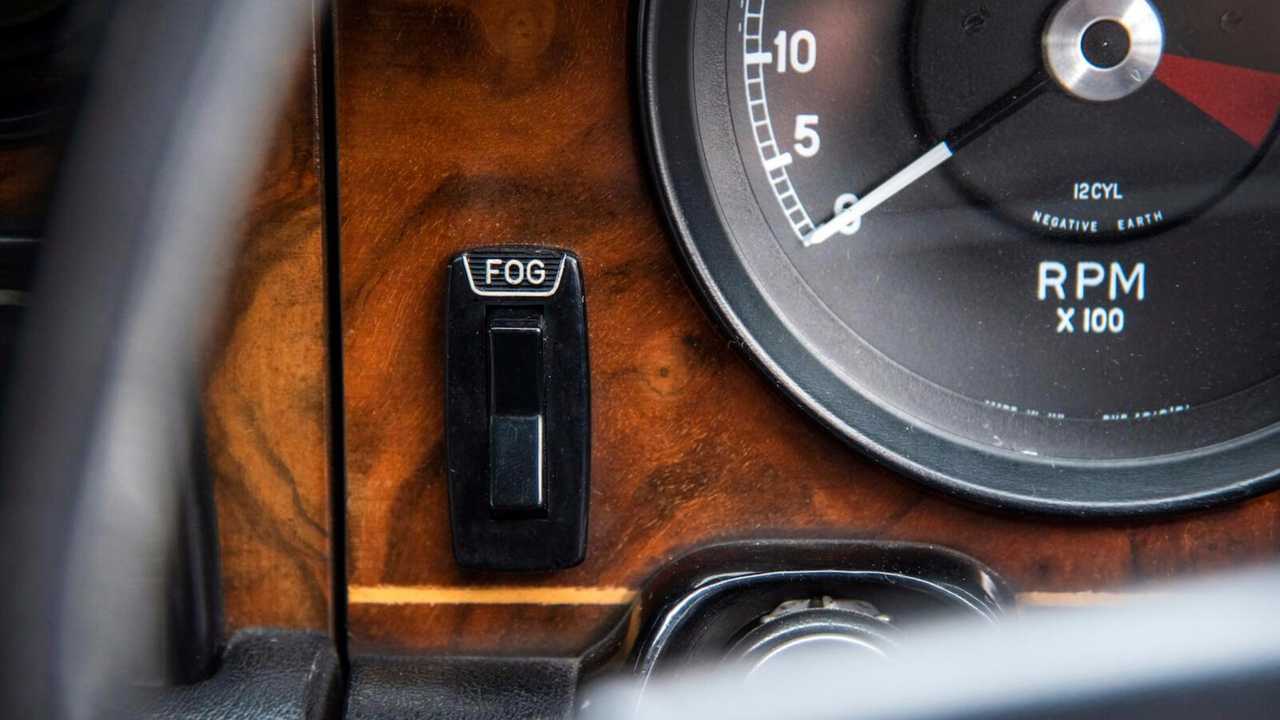 Inevitably, I caved into the pressure. As I gradually built up speed, the supple suspension seemed to hunker down, hugging the road and pleading to tackle the upcoming bend with gusto. Powering out the other side, poise and balance remained firm – somewhat surprising, given the car’s vast girth and length.

Despite my best efforts at giving the V12 what it desired, the vehicle seemed unruffled; indeed, it appeared rather unimpressed that the rear didn’t sling itself outwards with accompanying tyre smoke.

Yet, doing so would have amounted to high treason, like asking the Queen Mum to engage in a bout of kick-boxing or participate in a street fight. Rather, we returned to wafting around tree-lined B-roads, meandering through local villages and dropping off at a pub or two en route. I’m sure she would have approved... 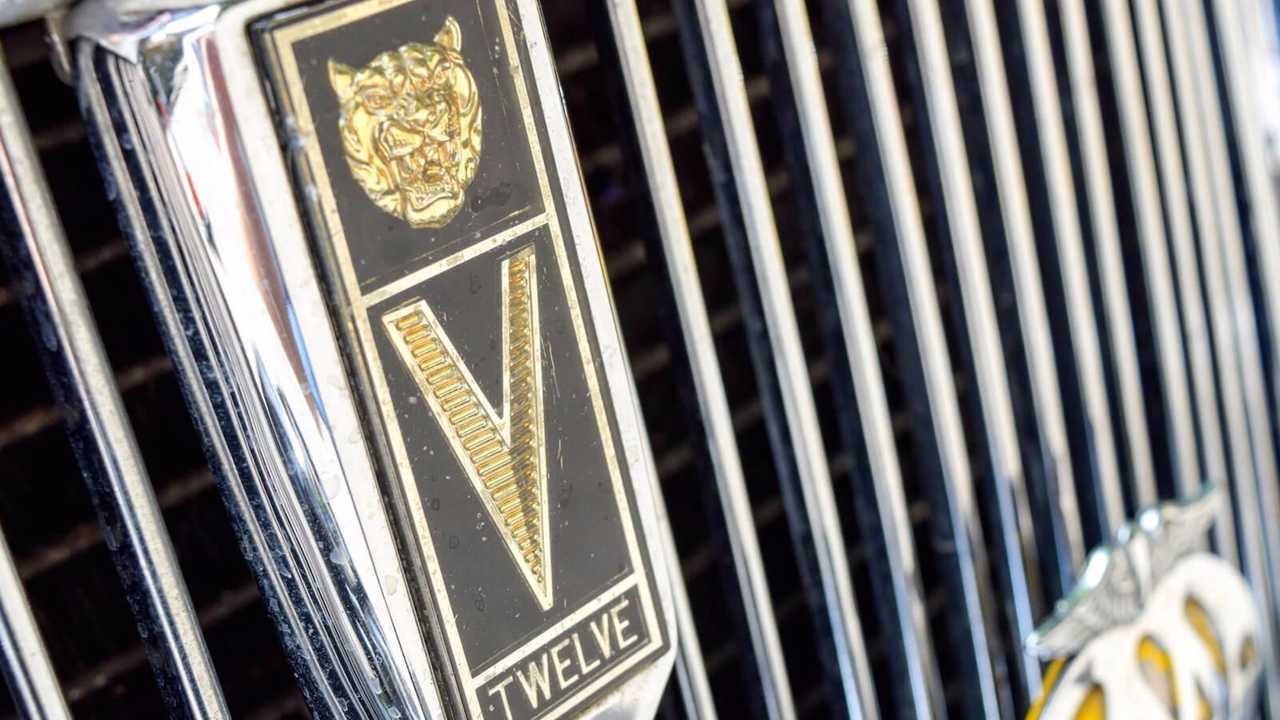 After only an hour on the road, I was forced to return to base. Not that anything was broken, but the fuel gauge had plummeted. With some spirited driving amid the usual throttle work required to counteract steep gradients and tight undulations, the 5.3-liter brute was averaging no more than nine miles per gallon.

Clearly, you’d need a Royal budget to run the blasted thing. Those tax increases in September 1973? It’s probably because Queen Mum was using this as a daily. Nevertheless, for all that cost, the levels of sophistication are pretty much unrivalled by today’s automotive white-good offerings. 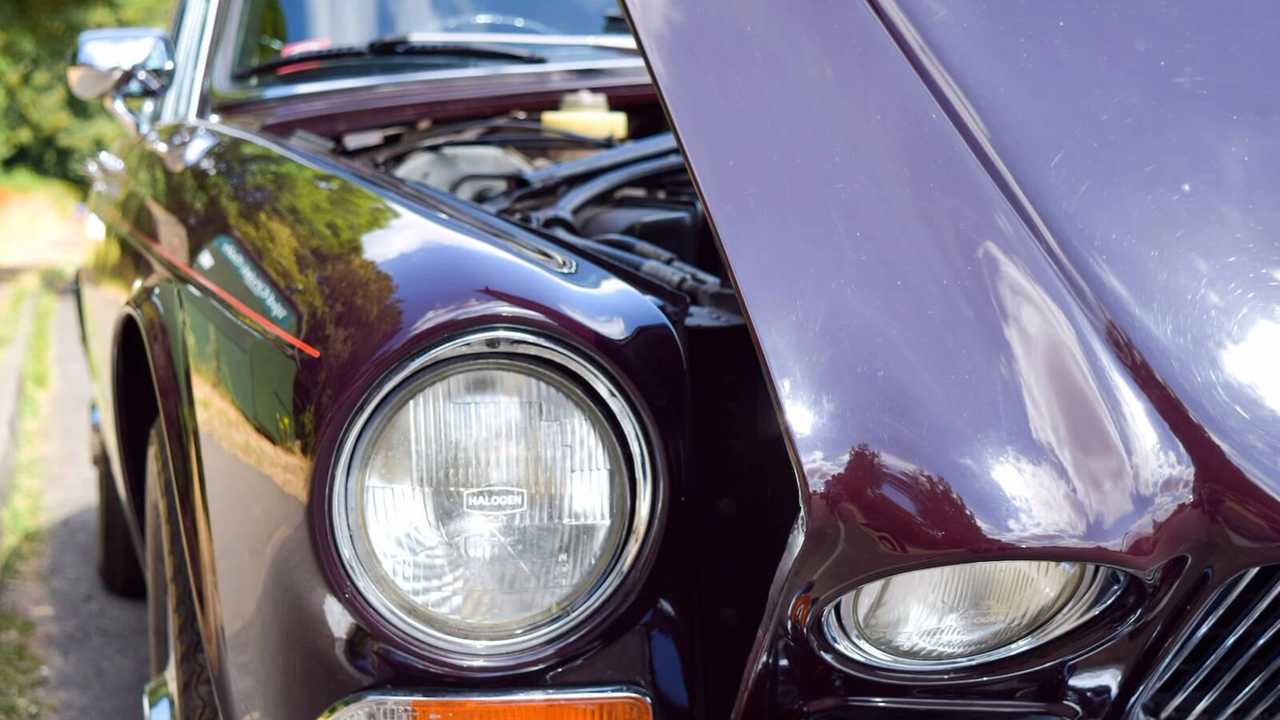 The urban legends surrounding well used Jaguar V12s were also disproven, with the humidity and enthusiastic acceleration failing to remove the steadfast temperature needle from the middle of the gauge. Oil pressure was spot on, and nothing had fallen off. Just as well, really, as I wouldn’t have fancied explaining that to the Jaguar engineers...

As I swanned back to the start point, where I was subjected to parking the XJ’s bulk in a tight space for all to watch, I realised my already derelict XJ40 was now looked even more dishevelled. However, I wasn’t heading home yet – there was another car waiting in the wings, and it too was rather special. You’ll have to wait until next week to discover what was next in line... 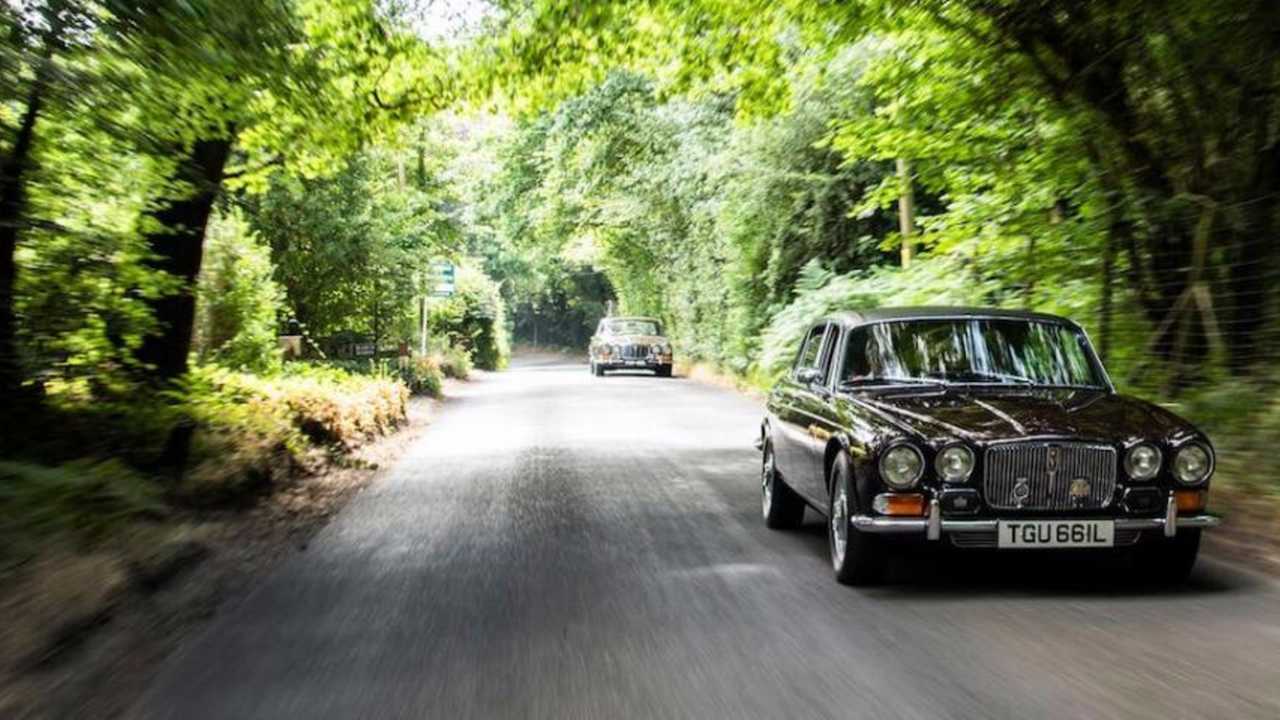