How To Get Two Amphicars For The Price Of One!

Hybrids are all the rage at present. Those who utilize their private jet to attend overseas Greenpeace demonstrations, and wax lyrical about their Toyota Prius, claim all manner of benefits in regards to hybrid technology. However, there remains only one hybrid machine that gets our attention – the Amphicar.

Incredibly rare and ultimately collectable, the Amphicar employed Triumph’s 1147cc 4-cylinder engine to great effect; by allowing the vehicle to traverse both the highways and waterways of North America. Built between 1960 and 1965, although still available to register until 1969, only 3878 examples left the West German factory.

Back in 1965, two Amphicars successfully navigated the Yukon River of Alaska before then tackling the English Channel. Forget petrol/electric hybrids, it’s the car/boat fusion that’s the true king. Sadly, most have rotted away courtesy of time’s onward march. 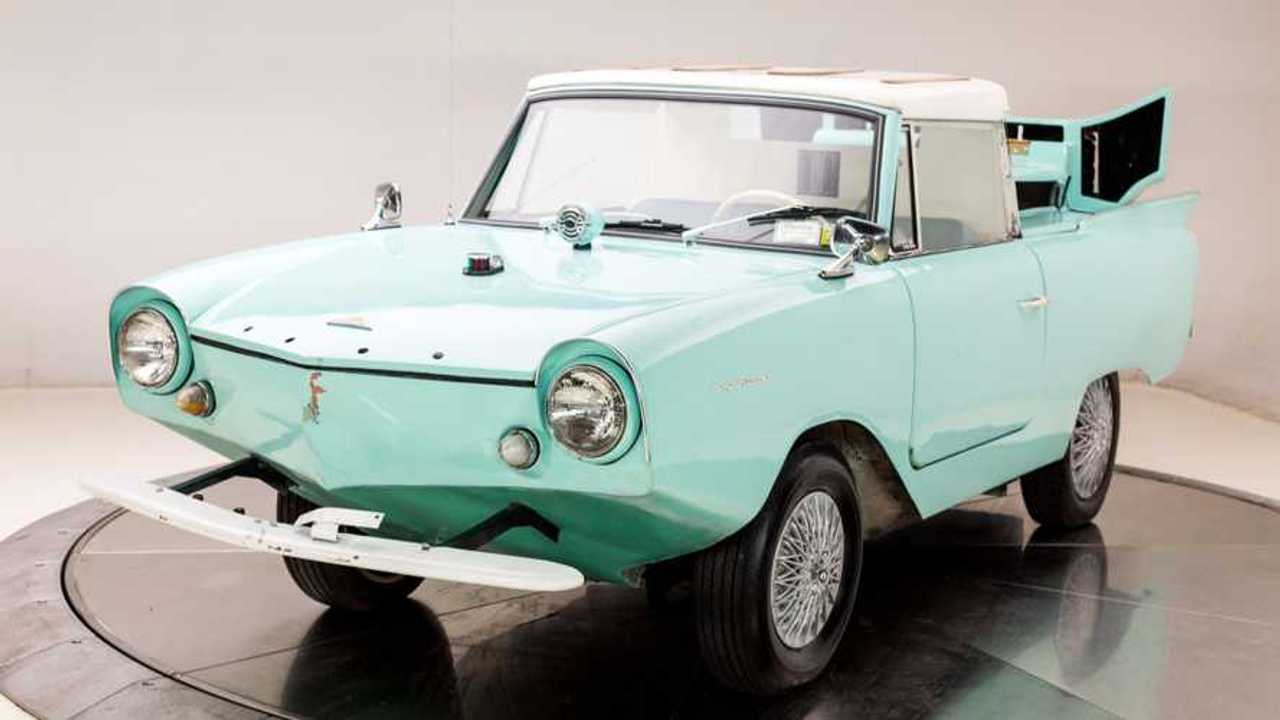 Therefore, finding a healthy one undamaged by salt water exploits can be tricky. It’s why Duffy’s Classic Cars have given a cause for celebration. The Iowa-based dealership has two specimens in fantastic working order. A rare opportunity for ‘His and Hers’ with a difference.

First up is an incredibly late 1969 model at $22,950. However, this one is a bit different. The Triumph engine has been ditched in favor of a Buick V6, whereas the original 4-speed manual transmission has been swapped out for a 3-speed automatic with floor shifter. You can get a closer look here.

Quite whether this further enhanced Amphicar can still float is up for debate, as Duffy’s haven’t yet tried it out. They do advise that you ‘make sure the life jackets are handy if you decide to descend the boat ramp’, and that an attached tow rope is fitted for emergency recovery.

It is worth noting that the paint has been described by the vendor as ‘amateur-ish’, and there is some damage to the nose low down. But these attributes are easily fixed. As far as value stretches into the world of unique collector cars, nothing comes close to the offerings of this bespoke machine.

For those who seek originality, Duffy’s can also provide an outstanding 1962 specimen in red. Cosmetically restored and mechanically resplendent, power comes fresh from a period-correct Triumph powerplant mated to a 4-speed manual gearbox.

Duffy’s Classic Cars can confirm that newer props and seals keep the car moving and afloat in the water, making for years of cruising and floating pleasure. Naturally, with all the bells and whistles, this example costs a bit extra at $78,950.

Not all that long ago, an Amphicar hit $125k at auction. When you look at it that way, here you've got two prime examples for way less than that. Should you purchase both, you'll still walk away with nearly $25K change. Get a closer look at these Amphicars thorough Duffy’s Classic Cars.