Granpa's Rover P5 Has Been Transformed Into A V8 Rally Monster!

More famous for holding ex-British Prime Minister Harold Wilson's pipe, the only thing now being smoked in here is the competition!

TVR employed several variants of the legendary Rover V8, ranging from 4.0 to 5.0-liter displacements. However, it’s rare to find the partnership successfully undertaken the opposite way around. Therefore, delving into our classifieds, this Rover P5B pulls our attention like a rabid Labrador. Meet the posh Rover with a thumping great dollop of modern eight-cylinder power.

More Rovers!
Fancy a lesser-known coupé that deserves your time? Check out this Rover 800!
Why you (secretly) want a Rover Sterling

The final incarnation of Rover’s P5B saloon started production in September 1967, fuelled by a 3.5-litre powerplant lurking under the bonnet – freshly pinched from a Buick design, hence the ‘B’.

Although a favourite of high-ranking Government types, including four embodiments of Prime Minister and even Her Majesty Queen Elizabeth II (with an Arden Green paint job, no less), the graceful and plump P5 found its true calling with families who yearned for comfort over frugality. Wealthy families, that is.

Wayward to handle and slow on the uptake, perhaps, but the lazy V8 burbled along with the gradual pace of a slow-burning firework. The car's state was so unstressed that the driving experience on offer could soothe even the worst of days. You could drive through the falling rubble of an earthquake, unperturbed enough to begin mindfully planning that long overdue revamp of the study.

However, while a regular P5 is akin to the butler offering a cup of Earl Grey while taking your coat, this particular one would greet you with a punch in the gut, before then trying to take your life. For, unusually, we have a TVR-tuned lump growling away beneath the aristocratic bodywork.

Not that the body is stock – we’ve got a roof-mounted tyre rack and auxiliary driving lamps, a lowered stance over OEM wheels and beefy, fat sidewall tyres to complete the ‘Lara Croft’s Dad’ look. 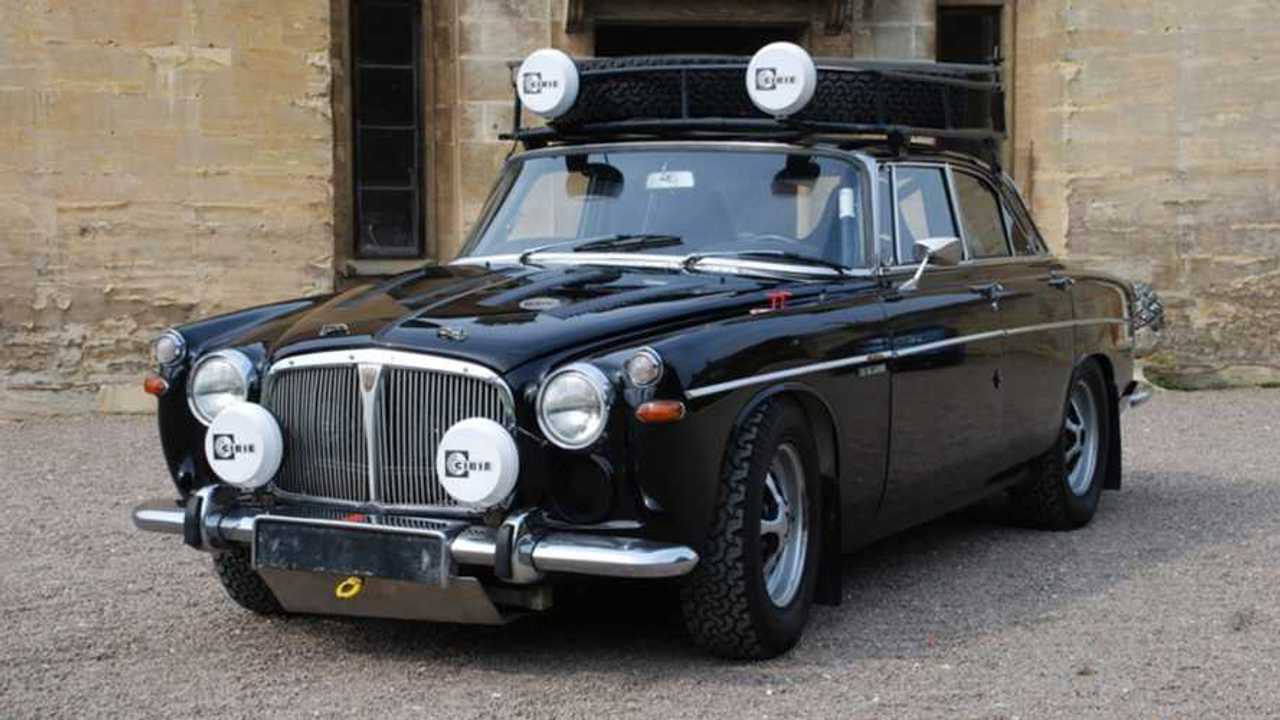 While purists may clap eyes on the modified louvers and weep, the alterations have been undertaken tastefully, including the addition of a front skidplate.

Even the interior has been rebalanced with a sympathetic mind, the cabin appearing mostly original with worn seats and a ‘used’ vibe. The rollcage has been planted directly under the rear fold-down armrest. Perhaps once used for ex-Prime Minister Harold Wilson’s pipe, the only thing smoked in here now is the competition.

Although there are no power-output figures, TVR-derived examples utilised fuel injection. With an estimated 300bhp on tap, this is grandad on steroids; just as at home pottering around town as it would be powersliding on opposite lock in the mud, or tanking down a gravel rally stage in pursuit of lesser mortals.

Sold alongside some of the finest classic Aston Martins on the market, we can already state that this rally-prepared P5B will have been augmented to the finest degree. The dealer, well-known Aston Martin specialist Desmond Smail, sells nothing less.

Built to claim victory, rather than to appease the P5's following, this is very much a car with go, rather than show. Besides a full rollcage, there is also a rally computer and a smattering of custom fitments to aid the cause. Get a closer look at the TVR/Rover hybrid here.